When I was a young girl I lived in town.  I did not have much contact with the horse world, not for lack of want but just did not even see a horse more than once or twice a year at the fair.

One day my Dad took me to a horse auction that a friend of his ran.  I remember being about 10 or 11 at the time and listening to my Dad and this fellow talking.  The friend was talking about the value on a certain horses offspring dropping overnight.  I had no idea at the time but that was my first introduction to genetic testing.

The horse he was talking about, of course, was Impressive and it was the beginning of the HYPP / Impressive controversy.

Fastforward 20 years and we find me at the same man's auction - still going but now it was called a production sale and there were a lot of really nice horses there.  I couldn;t afford to be there let alone think about buying horses, but I did end up buying one.  Again little did I know the significance of that one $200 purchase.  I bought the scrawniest ugliest colt at the sale but he was registered... 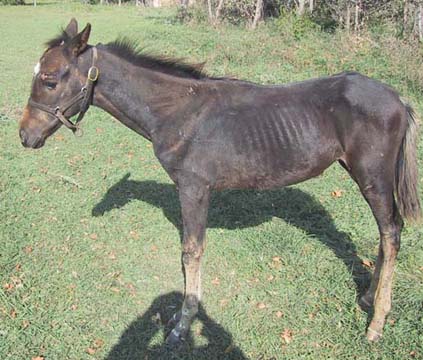 Everyone laughed at me - and you can see why from the picture. At this time I had a few grade horses at home and had dabbled in training them.  Well when we got this colt home it became apparent there was something very special about him. after we got some weight on him we immediately started doing groundwork and it didn;t take long to see he was totally different than any other horse I had ever seen or owned.  He was smart - it seemed like everything we set about to teach him he already knew - he took to each new thing his whole life as though he had alwasy been doing it.  Well a couple years later I wanted to buy a stallion - I had looked over my colts papers and there was one horse that stood out.  Impressive.  I didn't know a lot about horses at that time but I did know mine was different and I wanted to reporduce that same temperament and trainability - I had heard of HYPP at this time and knew that I needed to buy an nn stallion.  Well at that time the internet also started to be a pretty big thing and I remember looking up info on Impressive and HYPP and I was shocked.

Apparently my fantastic colt had a bloodline no one wanted.  How could this be?  How could someone not want these fantastic horses?  I bought an Impressive bred stallion anyway (nn) and have been reproducing that fantastic temperament for the last 15 years and the other thing aobut Impressives is they are lookers too, and very versatile. 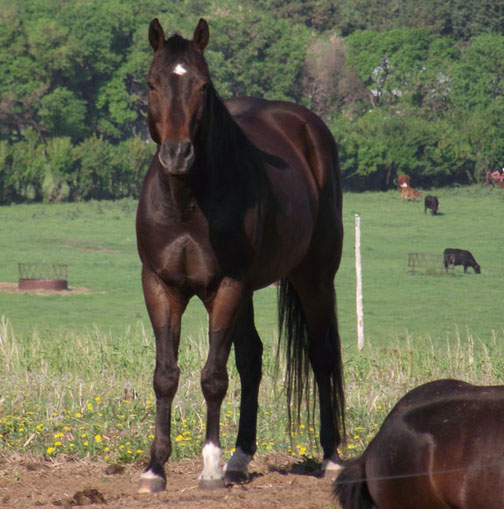 Yes, this is that same scrawny colt - 15 years later - and he has been the most fantastic horse.

I have been stunned though at the amount of people who I came across that just say "avoid Impressive".  Sadly that was what the first genetic testing did - just half educated everyone.  They took the first part Impressive has can distribute some bad genetics but didn;t take the last half of the equation that the gentic testing offered.  NN Impressive horses have no HYPP and HYPP is not an issue for them.   So many people have missed so many good horses over the years becasue of that half education.

So the first thing that young colt taught me was that genetics matter and that genetics can be reproduced.  Sadly he had another big lesson to teach me and that was about another genetic disease which had nothing to do with Impressive.  This one was called PSSM.  He was always a little off physically from when he was little - we chalked it up to his poor start in life and made a bunch of other excuses for him.  When we finally started really riding him at about 6 - (we had ridden him before that but just around the yard a bit) - we noticed he always seemed to be coming up lame when we went to shows - he'd be decent at home but lame at the shows - this prgressed to a few other issues and when I first heard about PSSM I knew that was him.  We had him tested immediately - he was nn for PSSM1 -  I still knew something was up with him and when Equiseq started testing for PSSM2 I was pretty sure this time we would find the answer - and he came back n/P2.

And here again is why I believe Impressive got an even worse reputation than he even had before the HYPP test came out.  There are a few lines of Impressive bred horses that are PSSM positive.  They trace back to horse in the line that have nothing to tdo with Impressive and it is quite likely Impressive had no form of PSSM.  But someone would get  a horse in and it would have issues or be hard to work with and they would look at the pedigree and say "yup, Impressive" those horses are know for being bad horses - and another one would go down the road, even if the horse was nn for HYPP - Impressive would get the blame.

It is a tragedy.  I Still regulary see posts saying avod Impressive lines - when what should be said these days is you need to test any horse you are thinking of buying fore genetic diseases.  Almost all lines carry some PSSM so you might avoidm the Impressive horse and buy the PSSM horse and end up with a big headache anyway.  Don't avoid any lines.  Don't miss out on a fantastic horse - test and find ones that are clear of as much genetic iddues as is known about at the time.  Sure more tests will become available and genes will be discovered but you can eliminate the ones you know about and gretly reduce your odds of purchasing a genetic problem.

I love the horse in the picture above and wouldn;t sell him or trade him for any other horse, but I sure wish I would have known him without PSSM.

CLICK below for MORE INFO & TO ORDER a Report